North Korea Claims to Have Tested a Hydrogen Bomb

By Anthony Taylor • Posted in Forex News • No Comments

The tensions around the Korean peninsula are beginning to escalate again, as the latest headlines from North Korea point towards a successful test of a hydrogen bomb, several times more powerful than a nuclear bomb. Seismologists had detected a 6.3 degree earthquake around the area and North Korean authorities had claimed it had been generated by the explosion. 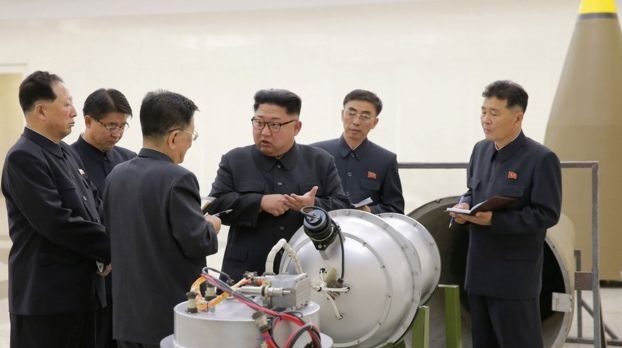 Forex trading activity and US equities especially had been influenced by the latest headlines. The

Dow Jones Industrial Average gapped lower by 100 points at the open and since then the market had been consolidating. The S&P500 opened lower by 15 points and the same as the Dow, no significant buying activity had been seen thus far, confirming that the bulls are reticent to buy now, as the tensions have arisen.

The forex market had also been driven by latest news, with the dollar being again under pressure, probably boosted by the Friday weak employment figures as well. Most majors are expected to gain more ground against the US dollar, as forex trading activity around it is intensifying.

Safe haven currencies like swiss franc and yen could also benefit from current rising tensions and also, gold is another safe investment, being confirmed by the latest gains.

It looks like the tensions between the North Korea and US could escalate further and the secretive communist country is not willing to give up on this plan to develop dangerous weapons. The likelihood of a strike is reduced thus far, but specialists suggest that this might be a strategy that will help the country get rid of some of the sanctions imposed by the UN since they started developing their nuclear program.

Also, the development of those weapons can help the country in future negotiations and give their leader more power than ever.

As long as the situation won’t find a solution, which is very unlikely will happen, we will continue to experience calm periods with no significant events, followed by sudden shocks which could have a significant impact on prices across the financial industry.

Long-term strategies are not advised in this kind of environment, especially if it’s about instruments that are extremely sensitive to negative news. Profiting from short-term movements can be way more effective as it can help bank more profit before the market turns impulsively against the direction you we’re trading.

Trading foreign exchange on margin carries a high level of risk, and may not be suitable for all investors. The high degree of leverage can work against you as well as for you. Before deciding to invest in foreign exchange you should carefully consider your investment objectives, level of experience, and risk appetite. No information or opinion contained on this site should be taken as a solicitation or offer to buy or sell any currency, equity or other financial instruments or services. Past performance is no indication or guarantee of future performance.