We have talked about the basic forex terminology in a previous article, but this time we will elaborate on a subject that is considered to be important by most of the traders. Understanding safe-haven currencies is crucial when trading forex during periods of economic contractions. We’ll explain what a safe-haven is and also we will discuss the two most important safe-haven currencies and why they have gained this status.

What exactly is a safe-haven currency?

A safe-haven is an asset (in this case a currency) which appreciates in value during periods of political uncertainty or economic contractions. Due to high risk-aversion from the investors’ side, riskier assets are being dumped and this safe-assets are favored.

The main driver of this shift is a change in the overall crowd emotions. Fear the most dominant emotion during an uncertain period and it triggers such response from investors.

Another thing worth to mention is the fact that managing risk during this kind of periods is hard, so high-yielding assets are not in the first place. 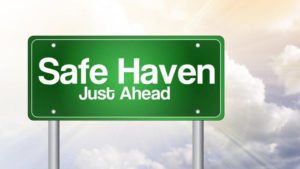 The most important safe-haven currencies

First, we need to talk about the Swiss franc. Although in 2018 it is now the same safe-haven we used to know a few years ago, due to aggressive monetary policy from the central bank it continues to be a safe place in periods of uncertainty. Why is that?

Because until a few years ago the SNB was the only central bank who backed 10% of the money supply with gold. Also, the economy and especially the banking system is solid, which makes investors keep their money in Switzerland.

The second most important safe-haven is the Japanese yen. Since the Asian crisis in the early 90’s, Japan had to face a tough deflationary period. Since inflation is still low in Japan, despite the aggressive quantitative easing from the BOJ, the yen is the most important safe-haven in the forex market. We’ve seen in recently growing against the major currencies as fears of a trade war between China and the United States intensified.

With that being said, the yen and the Swiss franc are the best safe-haven currencies in an uncertain period. This can really help you to avoid painful mistakes.